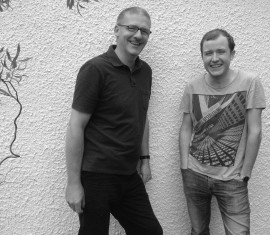 Paul Clarke is an architect, writer and filmmaker. He is a Reader in Architecture at the Belfast School of Architecture at the University of Ulster, where he is the Course Director and Studio Coordinator for the Master of Architecture programme. He is a member of the Research Institute of Art and Design, and the All Ireland Architectural Research Group. Born and trained in Glasgow his work and writing has been published in a number of International architectural journals and books. His interests include the relationship between architecture, film and sound, as well as architectural drawing, sketchbooks and representation. He was the curator of a recent touring exhibition called ‘The Secret Laboratory’.

Conor has a background in sound, music, film and urbanism. He is currently undertaking a PhD studentship at the Sonic Arts Research Centre at Queen’s University Belfast, where he is part of the Recomposing the City research group led by Dr Gascia Ouzounian and Dr Sarah Lappin. His research is at the intersection between sound art / sound studies and architecture / urban design. From 2009-14 Conor worked as Creative Producer at PLACE Architecture Centre in Belfast, where he led on public engagement projects, publications, events and workshops.